Large clumps of balsam always grow by the Church Road bridge and scattered throughout the undergrowth on the Meadow Mead side of the river opposite the community orchard. When river levels are low, these areas can be reached from the river bed though care must be taken to avoid deep spots and the bank can be a bit tricky to climb in places. It’s also possible to cut a way down from Meadow Mead though fallen branches and occasionally dumped garden waste can make it hard work. Despite these challenges, on a very warm Midsummer’s Day we cleared the riverbanks by the community orchard then returned to wade up the river to access the big clump by the bridge. The balsam was fairly tall and a few flowers were starting to appear. 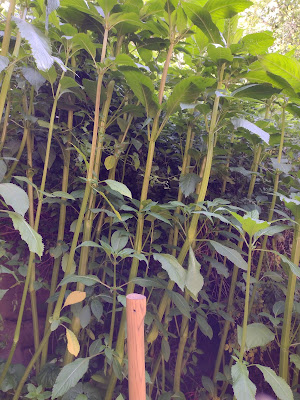 We met at Nightingale’s Bridge where balsam could be seen growing on the mud banks on both sides of the river and on the bank just upstream from the bridge.  The water level was low so it was easy to cross the river to reach a large clump on the east bank where access has been made more difficult by a new barbed wire fence. 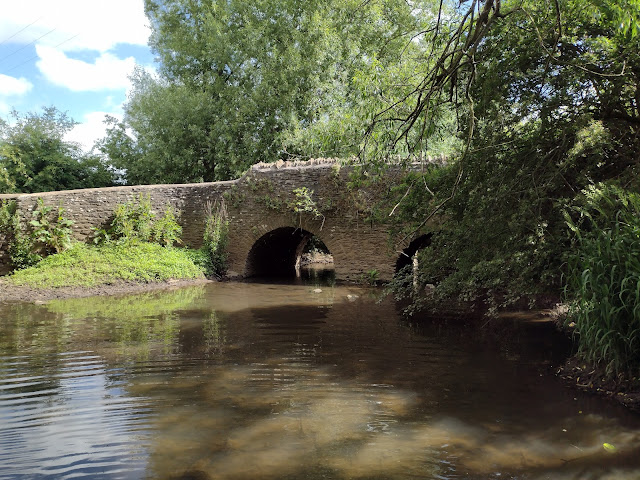 The edges of Hilly Fields remain mostly clear of balsam after we cleared it a few years ago so we  crossed to the far corner where we always find balsam. It was not as bad as the first time we visited this area but there was still a lot of tall balsam growing amongst dense nettles. 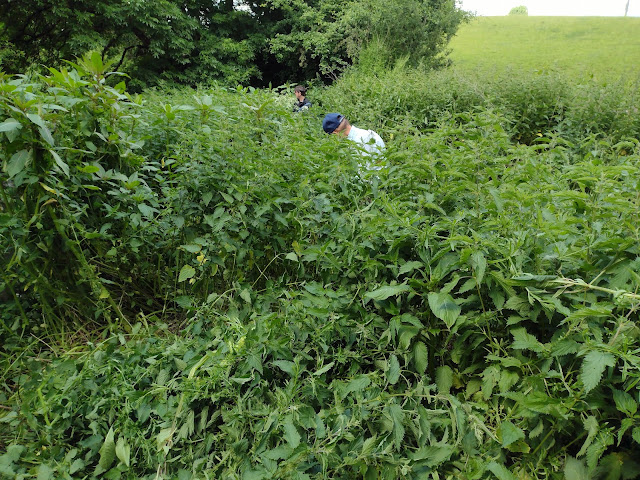 On the way back to the bridge we stopped at a place where we’d seen a few balsam growing on the river bank behind the fence. As usual there turned out to be a lot more when we looked more closely so we finished our morning session by clearing those.
Posted by Phil Handy at 12:35 No comments:

Black Rocks and beyond - June 7th

A group of five volunteers walked upstream from St Peter’s Church to Black Rocks where the few scattered plants seen a couple of weeks ago were revealed to be accompanied by many more hidden in the undergrowth and along the riverbank. Fortunately the river level was low so we were able to reach most of them with a bit of wading and a bit of scrambling over and under fallen branches. 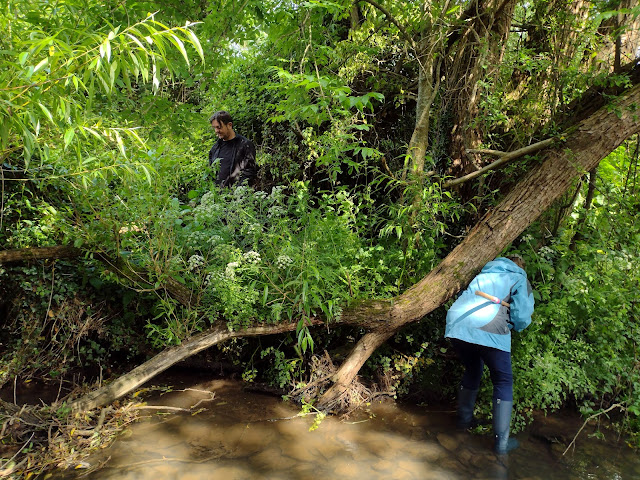 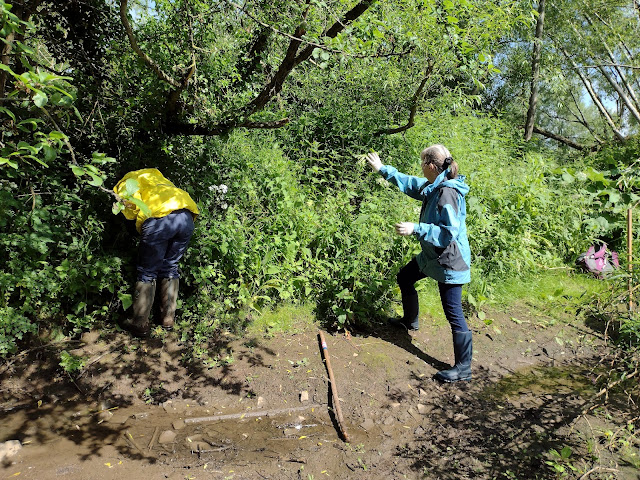 After clearing this area, we continued upstream toward the little islands in the river, clearing a few small plants on the near bank and some larger ones across the river on the way.  The islands themselves were very overgrown with a variety of plants including balsam and there were some dams created by fallen trees which had also become home for balsam. We were able to clear the majority of these.
Posted by Phil Handy at 17:34 No comments:

Meadow Mead and Glebelands - 31st May

There was a heavy shower early in the morning but the day brightened so we went ahead with our planned session while taking a little more care on the riverbanks and in the wet undergrowth. Four volunteers turned up and we started at Meadow Mead where there was some balsam visible and a lot more in the undergrowth and on the river bank.

After clearing that we moved on to Parsonage Bridge where there was a large clump on the east bank. We were able to access it both through the undergrowth along Meadow Mead and by wading across from the opposite bank although a large fallen branch across the river has made access a bit more difficult. 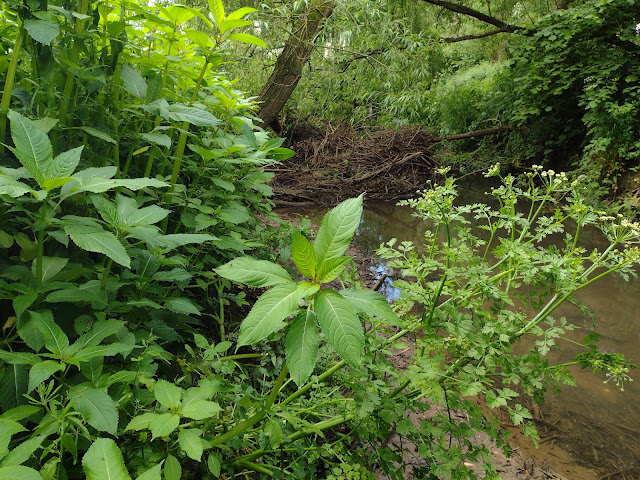 We also cleared some of the balsam growing along Glebelands where there were signs that other people had been pulling balsam as they walked along the river.

I walked along the river from Cogmill to Nightingale’s Bridge to assess the balsam situation this year. The Frome Valley Walkway was very picturesque in the spring sunshine. 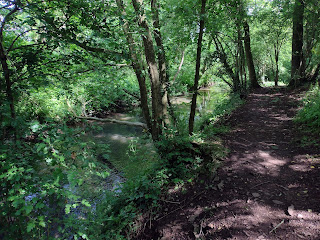 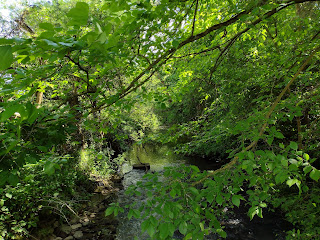 There was balsam visible in a number of places, notably at Black Rocks, Church Road bridge, Glebelands, Parsonage Bridge and Nightingale’s Bridge. There’s undoubtedly more balsam hiding in the undergrowth which is not yet visible.

Last year the field behind St Peter's Church was relatively clear of balsam so we didn't bother clearing it. In retrospect this might have been a mistake as this year it was quite badly infested again. The area near the gate was worst and there were a couple of clumps near to the churchyard but the far end of the field was reasonably clear apart from some large plants low down on the river bank. 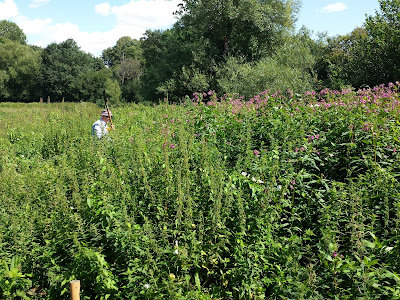 Since it was quite late in the season we just went in with slashers and cut the balsam down rather than pulling it up. 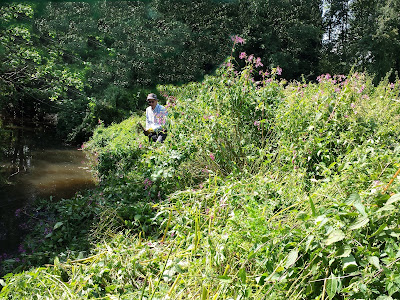 Although some seed pods were popping, we didn't see any which had fully ripened so hopefully we'll have done enough to reduce the level of infestation again.

Despite recent rain, the river at Iron Acton was only a little higher than usual at this time of year. 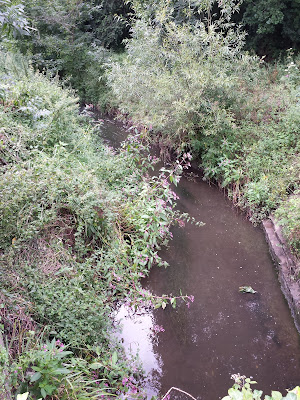 I joined a group of volunteers from Iron Acton and we worked our way upstream from the bridge at Frampton End Road. There was a scattering of balsam all the way along and some big patches on the field edge on the opposite bank. 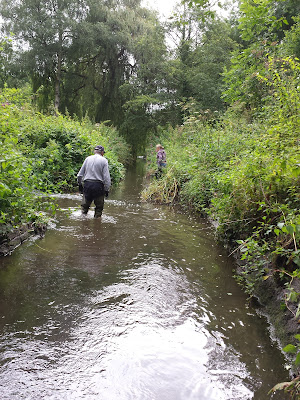 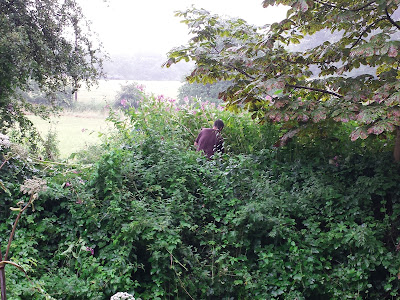 Dog walkers also told us of some big patches further upstream but unfortunately it started to rain fairly heavily so we decided to call a premature halt. However we managed to clear a good stretch before we finished.

This journal records and tracks our progress in dealing with Himalayan Balsam along the River Frome in Frampton Cotterell.

Our ambition is to keep the amount of Himalayan Balsam along this stretch of the Frome to manageable levels.